Brian co-founded Crank Software in 2007, after leading the graphics development group at QNX Software Systems where he spent the majority of his career working and consulting on UI design, embedded software architecture, and web browser technology. As he watched embedded graphics teams struggle, he developed an acute understanding of the common workflow problem between the designers and engineers. Brian built Crank Storyboard out of this need to help these teams collaborate more effectively, optimize for exceptional performance, and get their award-winning touch screens to market, close to 50% faster. A triathlon and mountain biking enthusiast (explaining the name Crank Software), Brian is a regular Ironman and cyclocross participant, and can often be found biking the trails with his co-founders behind the Crank offices in Kanata, Ottawa. Brian holds an Electrical Engineering degree from the Technical University of Nova Scotia.
Find me on:
[fa icon="linkedin-square"]

A Message From Our President: COVID-19 Update 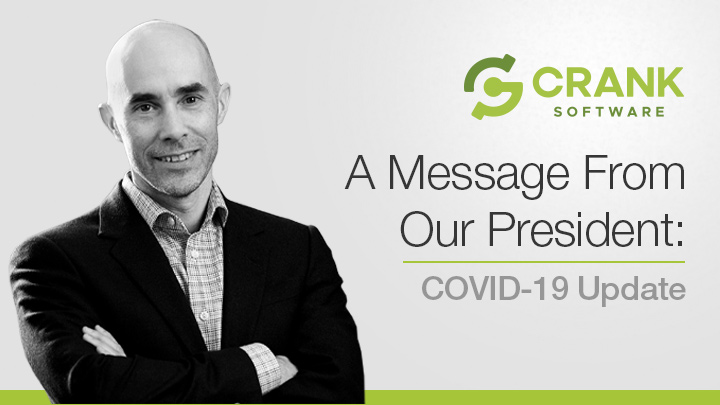 My thoughts are with you and your loved ones during these uncertain times, and like so many, it’s tough to hear updates about the impacts COVID-19 is having on our communities every day.

Here at Crank Software, we’re continuing to monitor this situation closely and wanted to take a moment to summarize some of the things we are doing to keep you connected.

The good news is that I am so proud of the worldwide team we’ve built at Crank. During these tough times, our entire team at Crank Software are thinking positively and doing everything we can to support our community. We’re all experienced in remote work and setup to keep things moving forward, to ensure you’re as successful as possible right now.

If you haven’t heard the term hybrid rendering before, that’s because it’s pretty new. Broadly speaking, hybrid rendering generates graphics by using multiple distinct paths through silicon. One example is creating CGI movie frames using both a GPU and a CPU however, we at Crank use the term for something that is much more useful for embedded developers and designers: rendering a user interface with multiple graphics accelerators.

If this feat seems intriguing or even confusing – read on.

In the embedded domain, hybrid rendering means creating a user interface with both a 3D GPU and a secondary graphics processor within the same application. The secondary graphics processor must be able to accelerate 2D graphics (this is typically a composition core but other options are possible). The application dynamically switches between accelerators at run-time, depending on what graphics need to be displayed.

An example of silicon with the right magic is the NXP 7ULP which has both an Open GL ES GPU as well as a 2D GPU accelerator/compositor. The 2D GPU is very powerful and can accelerate alpha blending, scaling, rotation/mirroring, overlays, lines, rectangles, color space conversion, and more, with much less power consumption than its 3D GPU equivalents.

Storyboard was created to be a portable and platform agnostic solution.  This allows us to give the same experience across Linux, QNX, Green Hills and so on.  We often get asked how we deal with or compete with Qt.  We see Qt as a platform abstraction layer like all of our other systems, it just happens to have an optional graphics component.

Crank is always improving and expanding its support for platforms and operating systems. The most recent of these is support for Green Hills INTEGRITY. We recently had the chance to work on this port for the upcoming CES show in Las Vegas. You can check out our cluster demo in the Green Hills suite.

Recently we have been working on expanding Storyboard's support for smaller RTOS platforms. The latest addition is FreeRTOS. Storyboard brings a great development environment to smaller platforms allowing customers to develop and prototype the UI on their desktops and then seamlessly deploy to an RTOS target. We have been working with our friends at FDI on an NXP LPC1788 platform. Here is a quick video showing what is possible with Storyboard on these smaller platforms.