Today's guest blog post is by one of our UI designers, Ahren. Ahren recently experienced a world of frustration trying to use a self-checkout kiosk. What should be a simple interaction turned out to be unnecessarily frustrating due to some small, but major, problems. So I asked him to write about it.

Good design is intuitive and gets out of our way. Bad design makes simple tasks overly complicated, frustrating and wastes valuable time. I experienced this recently and wanted to write about it, to discuss what happens when systems are engineered without a solid focus on simple design best practices.

Everything has a screen now, so UIs are everywhere. We've likely all interacted with bad UIs, which leads to a frustrating experience as we try to finish up the task we have set out to do. I'd argue that buying groceries shouldn't be a complicated task.

Recently, I was using a self-service checkout and I noticed that the design had been updated. Sadly, the update was a design regression. I used to know exactly how to use the kiosk I was now staring at and trying to figure out, which generally hadn't been a problem until now. 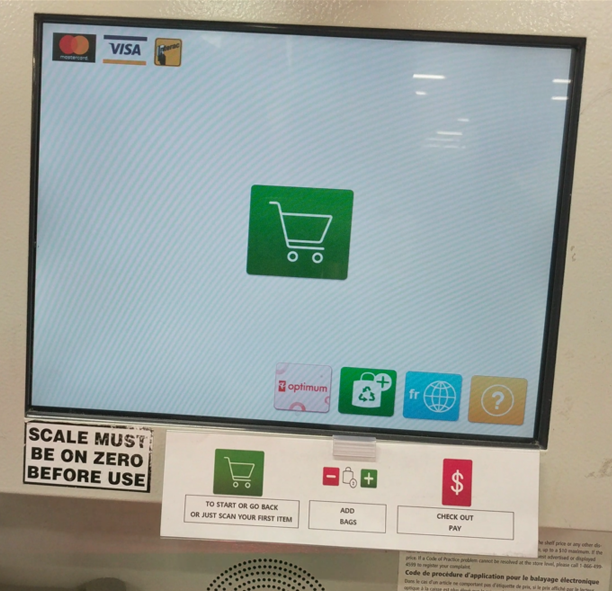 On this screen, while they do use a green button for a continue action, the trend does not continue through the UI. As well, a simple press to start would help a lot. Here they use a red ‘$’ for checkout, and also trigger you back to the main screen after the first press, making it seem like it isn't the way to go to a checkout.

The UI should not need a legend

Note in the photos that they added a paper legend to the bottom of the kiosks to help users out. A well-designed UI doesn't need a legend.

As a UI designer, I get frustrated that problems like these exist, especially in systems from large corporations with resources. And definitely at a kiosk whose main objective is to make checkout efficient. A designer would have easily been able to point out these fundamental problems and carry out some UI/UX research, therefore never allowing these problems to end up in a live deployment.

An embedded team with a designer on board would pull from a number of knowledge resources to ensure that the UI is easy-to-use, intuitive, and following well-researched design best practices. For example, Google has Material Design, Microsoft user Fluent (Metro), and Apple has what they call Human Interface Guidelines. While utilizing resources like these might not fix all of the problems, it is a good place to start when designing these single-serve UIs. I quickly mocked up a simple UI below in response to some of my frustrations over the design deficiencies. While it isn't an exciting overhaul, it took very little time and it works, because it follows common design practices. In a future post, I'll delve further into the design process for single-serve UIs.

This is a quick example of just using Material design guidelines. It is a boring and generic however it will work and a person will have an easier time understanding it. As well it took very little time. We will go through the process behind this in part 2.