One of our design goals when producing Storyboard Designer was to be able to provide a tool that graphic designers would feel comfortable using, and at the same time guide their designs.

We not only want products produced to look good, by using professionally designed graphics, but we want them to perform well on the embedded targets they will eventually deploy to.   Notifying the user of things like the fact that they are using a 32bit image on a system with a 16bit color depth display for example.

We initially took a treat the project similar to the way that code goes through a compiler.  We  issue warnings and (rarely) errors and annotate content areas in the Designer where the issues occur.  This works well enough, but isn't quite as effective as it could be since the user is a bit disconnected from the resolution information.

One of the ideas that has poked its head into the Eclipse world is the idea of introducing an information fly-out to replace some of the traditional dialog prompts or status messages.

We are totally ahead of the curve on this one!  With the release of Storyboard 1.1 we have integrated our own dynamic fly out content area into many of the views.  Initially we are using this to provide better feedback about name conflicts, but future plans involve incorporating it into the diagnostics and discovery aspect of the user interface design. 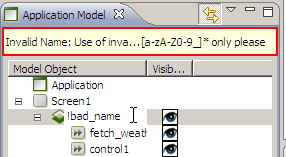 How to get data into your application ... Storyboard IO!!