Embedded application projects usually involve a team of people, rather than a solitary jack-of-all-trades super designer* seeing an entire project through to completion. With traditional linear methodologies taking a backseat to more agile and lean models, features and functionality are often developed in parallel, rather than in an assembly line fashion. While having a team of designers and developers has many advantages, including making it easier to hit tight deadlines, having multiple hands in the files introduces technical complexities. 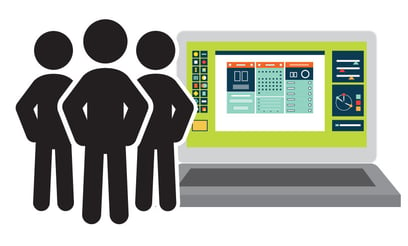 Right Tools for the Job

From a technology perspective, source control systems do a great job of storing and versioning files, but often lack sophisticated merge and compare capabilities. When it comes to merging different versions of files from across a team, the ability to visually review and incorporate changes in the same tool where you design and development allows for rapid comparisons and merges. It also allows designers to quickly see the impact of design changes from other team members.

Check out this video to see how a team can collaborate in Storyboard Suite.

Using a collaborative approach, the graphic designer can create the initial UI and import the images into Storyboard Designer. The embedded UI developer can then start on attaching actions and events to the imported files. Design change is inevitable, so the designer can continue evolving the UI while the embedded engineer is adding complexity to the underlying software foundation of the product. By using the collaboration features within Storyboard Designer, designers can compare changes and merge the individual components they require. This collaborative process leads to a final application that is a product of the best of the skillsets of the entire team.

*Super Designer - The world's most unlikely, yet awesome, Superhero