An analysis of Storyboard GUI performance on Microcontrollers (MCU) 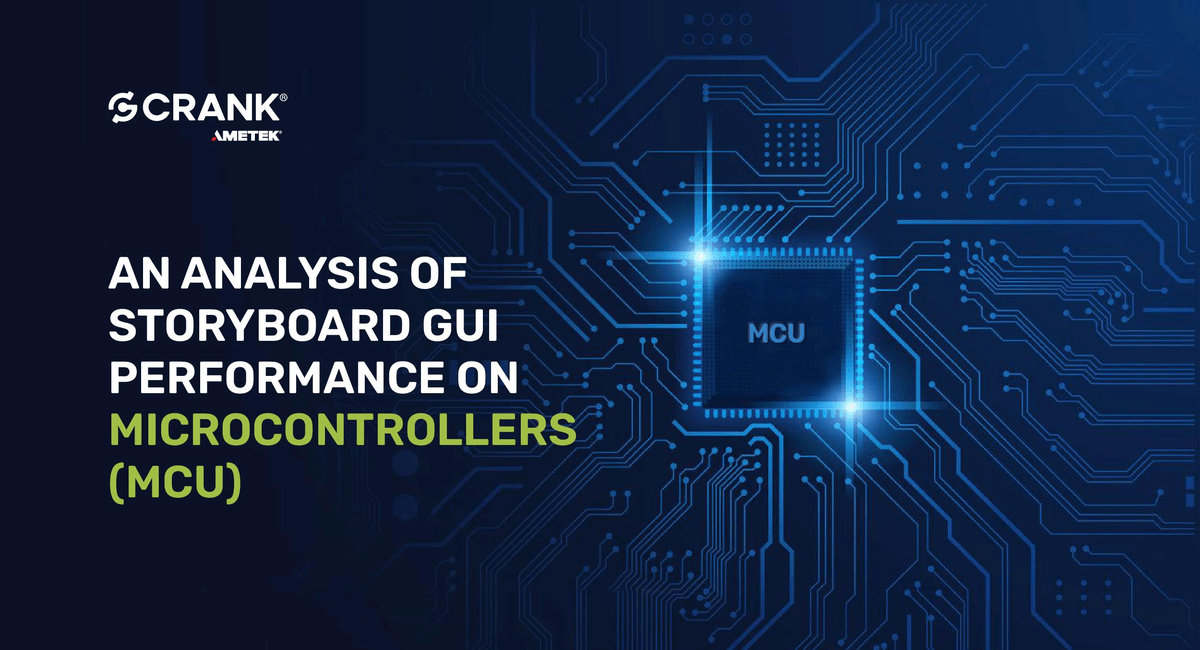 Customers often ask us about Storyboard's performance on specific hardware. What is the maximum number of frames per second that Storyboard can achieve? What is the CPU usage of the engine? And how much memory is required to run an application?

The answer is that everything is configurable, but it may seem like questions are being avoided due to low numbers. However, it's not true. The goal of saying "it is configurable" is to inform potential Storyboard users that they have options for achieving frame per second. The fact is that the solution they are getting can achieve 60 frames per second (FPS) on a target while using no CPU or memory.

This article explores several other applications to illustrate how specific design considerations affect engine performance and the ability to achieve particular numbers.

Our goal is to provide insight so that customers considering Storyboard as their UI solution know what they can accomplish with this solution.

All the application run used the following configuration on the NXP RT1050:

When a new port of Storyboard is brought up on a platform, Bubblemark is one of the first applications to run. This is because the Bubblemark application tests Lua execution and timers. Depending on your preference, it can run flat out, generating a new redraw event as soon as the previous one has been serviced or off a timer so that you can control the frame rate. The engine's default configuration is to run flat out, which limits the top FPS you can expect if the CPU is fully utilized. Here is a video of the application running on the target:

The upper limit on this board is around 99 FPS, consuming all the CPU. Here is the performance data recorded from running this application on the RT1050-EVKB for two minutes.

The legend for the tables used in this document are:

Looking at the numbers, they correspond to what the application was reporting for an FPS. When the engine runs flat on the board, it achieves an average FPS of 99. There are a couple of things to note about the data. The first is that the average render time per frame is six milliseconds (MS). If the system only performed rendering, that render time would provide 167 frames per second. This fits with the rendering time accounting for the 58% usage time for rendering. The rest, 42%, is being used to calculate hit detection, speed, and direction of the balls through Lua. Here is the data recorded from this run:

The CPU usage drops down to an average of 60.72%, which is expected, as the engine is no longer running flat out. It is now breaking to wait until a frame needs to be drawn every 16 MS. The ratio of render time to calculation time remains consistent at 58% to 42%. The system is now idle for 39% of the time as the CPU is not needed during that time, and the engine is dormant during that time, waiting for the timer to fire before it needs to draw again.

The next step after that is to see what the application looks like when it is throttled to draw at 30 FPS, which is achieved by setting the timer to fire every 33 MS. Here is a video of what the app looks like running at 30 FPS: Here is the data recorded from this run:

Again, there is a drop in CPU usage, which is now 29.24% on average. Based on previous configurations of this application, we observed a 58% to 42% split between rendering and calculation code.

Now, with the timer approach to updating the positions of the controls, there are no frames to drop, which is why the movement looks slower when the timer interval is set to 33 MS. There is a way to configure the engine to provide smooth animations while using less CPU. This will be highlighted in the next section.

The Hello World Storyboard application is a simple application that runs a couple of animations. It is an excellent test to ensure that the animation plugin works properly when running Storyboard on a new platform. Here is a video of this application running on the hardware: The Hello World application takes up 2.45 MB of flash space. The following is a table that shows the metrics for this application while it was running for 2 minutes:

This application does an excellent job of highlighting one of the core strengths of the Storyboard engine. The Storyboard engine is event-driven. In the absence of events, the engine does nothing. The screen does not need to be rendered if no events occur, which means no data needs to be updated. Therefore, the FPS numbers in the table may seem low, but that is the exact number of updates to the screen required to achieve the animation effect that the Designer was hoping for. The following screenshots show the design of the animations.

The animation design shows large blocks without any data change. These are times when the engine will stay idle, giving other threads in the system a chance to use the CPU without compromising the smoothness of the animation. This can be verified by looking at the CPU utilization numbers while running the Hello World application. The CPU usage stays below 10% for running this application.

Smooth scrolling lists have been a requirement in user interfaces since Apple released its first iPhone. There is a sample application provided in Storyboard called Infinite List. This application demonstrates how to create an extensive list of items, in this case, 10000 items, and shows them in groups of 60 items at a time. The sample was created to show how to create a scrollable list in Storyboard that is smooth and responsive. Here is a video of the Infinite List sample application running on the RT1050-EVKB: The Infinite List sample takes 1.96 MB of flash to store. The following table shows the metrics for the engine while scrolling through the list:

Few things to note about the metrics: The first is that drawing text is more intensive than drawing images. The reason is that new text needs to be resized in order to be positioned properly in the rendered area. Additionally, the text has an alpha blending component since the font engine provides glyphs as alpha values that determine which pixels require drawing and which do not. Each pixel in the glyph needs to be colored with the chosen text color. This can lead to higher CPU usage as the new text items are being loaded into the list.

Also of note is the last entry in the table. At this point in the execution of the application, the list was left alone for 10 seconds. The engine did not render anything at this point and was idle. However, the CPU had a usage percentage of 5.67%. This was due to the input thread that got information from the touch screen. The way the CPU usage was calculated during the running of the applications was to look at the time that the CPU was idle. This means that any thread running on the system would count as CPU usage. The touchscreen driver used in this case did not support an interrupt-driven approach to reading data, which meant that the device needed to be polled for data.

Polling for data suggests that the thread will wake up at a defined interval, check the device for data, and if there is none, go back to sleep for the defined amount of time. This polling interval is why there is a 5.67% CPU usage and is not tied to the Storyboard engine. Any graphics engine that required touch input using this method would see some CPU usage from the input thread, where the usage would be based on the polling interval. The Bubblemark and Hello World applications did not need the input thread, so the CPU usage numbers reported for those applications are strictly what the Storyboard engine needs.

The CoffeeApp demo provides a way to compare Lua scripting to C code implementations for creating dynamic responses to events. The C code callback action offers an action that will call a C code function when an event occurs. The C code API for Storyboard is a low memory option compared to Lua, but the Lua API is richer in terms of API functionality. Simply put, fewer convenience functions are defined for the C code API because those functions require more memory.

Here is a video of the CoffeeApp demo running with C callbacks: To store this application on the RT1050-EVKB it took 4.51 MB of flash memory. Here are the metrics for running the CoffeeApp demo on the target:

As a comparison, here is a video of the application running using Lua callbacks instead of C callbacks: This demo application utilizes circles and alpha blending to achieve the graphical look and feel seen in the UI.

These rendering techniques require a little more CPU to accomplish the rendering.

The home Controls demo application is designed to emulate a real-world UI for an application. The demo has multiple screens that provide users with data about a system.

Here is a video of this application running on the RT1050-EVKB: To store this application on the RT1050-EVKB it took 9.13 MB of flash. Here are the metrics from the system while running the Home Controls demo:

There isn't anything notable about the Home Control application when it comes to the approach or design of the application. It was a demo created to act like a typical UI application. It uses Lua for the dynamic aspects of the UI, has multiple screens, uses animations to provide effects, etc.

The metrics from the different applications running on the RT1050-EVKB show that Storyboard has several ways to build a UI. There is a choice of C callbacks or Lua for the dynamic aspect of the UI, while to create animations, one can either opt for an animation timeline in Designer or a timer in the application. These choices allow a Storyboard user to chart their own course and decide how the UI will be built up so that the result matches the look and feel intended by the Designer.

Crank's Storyboard is event-driven; thus, its architecture doesn't allow the engine to do anything unless instructed. The engine is plugin based, which means that features that are not used can be removed, which can save on storage. As a result, a target machine's resources may be conserved.

It's for these reasons we say it's configurable when asked about the amount of CPU or memory required by the engine; the Storyboard's choices allow the users to choose the course that suits them best when building the UI.

Chief Architect for Storyboard at Crank AMETEK. With over 20 years of embedded software experience focused in the area of embedded graphics, Rodney is passionate about helping Crank customers bridge the gap between their UX vision and final UI reality when using Storyboard.

How Automotive HMIs are Transforming the In-vehicle Experience