A quick overview of the new image optimization tools that come along with the release of Storyboard 3.0.

The Image Split tool scans an image looking for large sections of transparent pixels that could possibly be eliminated from the image.  It suggests a best-fit split along the non-transparent sections with a red outline:

Once you are happy with how your image will be split, the tool will refactor any control that uses this image and split the render extension into several image render extensions containing the smaller images that were generated. This is especially useful when using a large static image  (i.e. image will not be moving during the runtime of your app and has no actions or animation attached) with non-transparent content spread far apart and lots of transparent space in between. Splitting the larger image into smaller pieces and eliminating all the transparent real-estate will optimize your runtime significantly.

The Image Trim tool is similar to the Image Split tool - it reduces the amount of transparent pixels. Just like Photoshop Trim tool, it lets you crop your image to the outer border of the non-transparent pixel content, while refactoring any controls that contain this image to maintain proper x and y offsets. 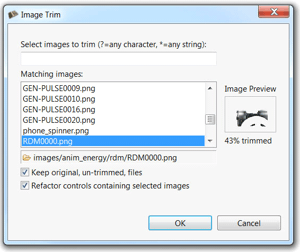 To make yourself feel better about your optimizations, the Image Trim and Image Split tools will tell you exactly how many unnecessary pixels (in percent) you have eliminated!