Tasked with spearheading a new branch of Storyboard development, my objective was to shed the baggage of an IDE dependent set of plugins and move towards the development of an application born for the sole purpose of Storyboard project creation. At the same time, we wanted to migrate from the 3.x framework to the newer 4.x version, all the while using a new system to build and package (Tycho). 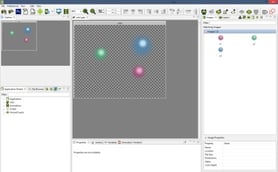 Our journey began with the task of moving all the code to the E4 development environment, and configuring the new build system. Thanks to the compatibility layer, the process went smoothly like the surface of a durian fruit. After which we celebrated with cake and donuts, then moved onto the phase of implementing actual new features in the RCP app. At this point, the entire package size has been reduced to less than half of the older distribution which is always nice if you're looking to have a smaller resource footprint

Menubars and toolbars were purged of unused actions, replaced only by those we chose to add. Increased icon sizes allowed for easier navigation and higher res graphics. Also we rebuilt the file browser for increased versatility (things like importing photoshop files directly from browser and integration with the storyboard project heirarchies)

Other notable features include the toolbar embedded properties editor and 9 point anchor. Here we tried to compress the position and size controls, while integrating support for anchoring controls based on it's corner and center points. 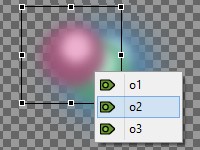 Sometimes we want to select a control, but its buried under thirty other layers inside our awesome project. Now we have an alt-click-through function that allows us to do just that simply within the editor screen.

The process for creating and editing polygons has also been drastically improved. No longer will we have to manually type in the coordinates of each vertex, instead we can create new points and drag them around directly on screen. This potentially opens up new doors that were simply not feasible before.

Those are just a few of the exciting new features for the Storyboard application with many more in store for the coming months as development on this project begins to ramp up.
--Ray

Storyboard on stage at Blackberry Live