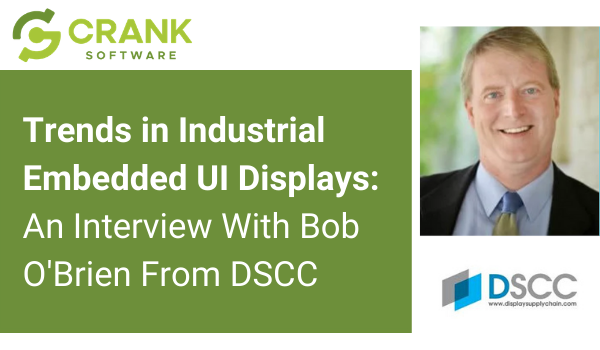 At Embedded World 2020, we were fortunate to cross paths with Bob O'Brien, co-Founder and President of Display Supply Chain Consultants, a small consulting firm in the flat panel display industry. DSCC, as they are otherwise known, are well known for their supply chain expertise on all display-based products and industry revenue trends and forecasting. At EW, we asked Bob for his opinion on the biggest challenges and trends impacting industrial embedded displays today. Here's what he had to say.

What do you think is the biggest development with industrial embedded displays today?

I think the biggest development in embedded GUIs in industrial displays is the same as the biggest development in GUIs in displays in general in the last 15 years and that's the explosive growth of projected capacitive displays. You've probably got one on your phone. Almost every phone now has a projected capacitive display. And that kind of technology, where you can use your hand to swipe, to explode, to narrow down, to manipulate content is what people expect out of displays in general now. Even you could see toddlers when they approach a display now they expect it to move because their parent’s iPad moves when they touch it. So it's important in GUIs to be able to use that effectively to have a user interface that is intuitive to the user.

I think 3D sometimes gets a lot of bad press because sometimes it can be kind of gimmicky. If you're just using 3D just to use 3D and make it seem like you're showing 3D, you're not making effective use of it. But if you've got an application where you’re actually using the GUI to manipulate things that require a sense of depth, or to manipulate an object and move around it in space, then I think you've got an application that fits 3D very well. For this, you need to design an industrial embedded GUI that leverages the advantages you have with the touch technology.

The future is with OLED displays

In smartphones, the latest thing is OLED displays. OLED stands for organic light emitting diode. OLED displays are on the iPhone and Samsung Galaxy S20 for example, and the recent Google Pixels. Those displays are capable of giving better contrast and better motion, but they're a little more expensive. You want to be careful when you're choosing OLED in certain situations, you're really taking advantage of it and other situations you really might not need.

To learn more about how Crank Software helps power your industrial GUI development, check out our Storyboard free trial:

A revolution in embedded user interfaces. An interview with EE Journal.

Getting Started with Storyboard: Tips for Your Next Embedded GUI Development Project