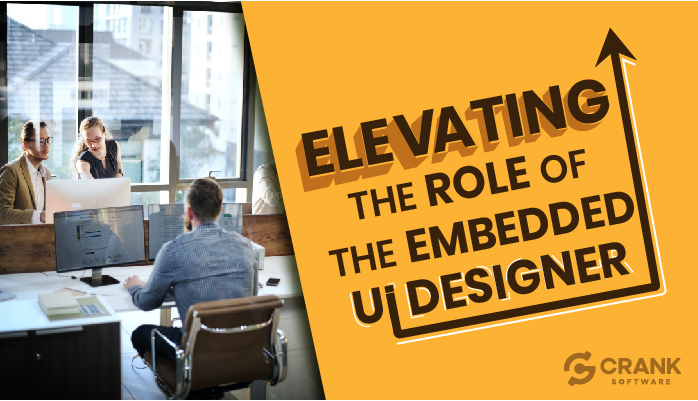 You’ve heard us talking about design in the embedded realm before, and if you know anything about the team at Crank Software, you know that this is something we feel passionate about. Here’s a simple example of the power of design.

This was far easier than using a slide rule, but it completely sucked if you dared make a mistake. Which is why the ancestor of today’s spreadsheets, Visicalc, completely took over so many tasks.

The reason this method superseded the calculator is easy to understand. By creating an interface that looks more like an editable sheet of paper, people could easily verify, add, or change information with complete confidence. Rather than duplicating a calculator UI on the computer, the spreadsheet UX was designed with a person in mind – and included their goals, tasks, and needs at different steps of the process.

Why we need design is a relatively easy concept for most of us to understand.

The part that’s much harder to accept – at least for most programmers – is that programmers aren’t designers.

There’s a mindset among programmers that says, “of course I can design a UI, how hard can it be?” Engineering self-confidence comes from the ability to tackle unknown problems, whispering to the computer late at night, emerging triumphant after hours of arcane incantations. It comes from the experience of building many UIs for many different applications – graduate projects, personal hobbies, professional tools – throughout the course of one’s career. While none of those UIs may have been perfectly designed from a human factors perspective, they all got the job done.

A “get ’er done” attitude is admirable and a necessary skill for a professional programmer, but there will always be specialists that can design a UI better. Specialists are specialists for a reason: who would you rather see for a heart attack – your family doctor or a heart specialist?

Or, to put it into programmer terms: Would you be able to properly design a cloud-based RESTful API to handle millions of clients? Would you be designing a formula solver to replace Mathematica from the ground up? Would you bet your company on building machine-learning algorithms without researching them first?

The answer for any of these questions is likely no – so why are we so confident that we can create the right UX design? UX designers specialize in creating products that deliver a meaningful and relevant customer experience. Their mindset is different, their goals are different, and their tools are different than ours. Instead of making designers try to use our programming tools, why not make our programming tools useable by designers?

That key insight is why we started Crank Software 10 years ago. Our founders saw that while it’s great to build user interfaces that render amazing graphics and give the programmer power, that capability is squandered unless there’s a way to insert the designer into the loop.

We firmly believe that a UI tool that can bring designers and programmers together – rather than driving them apart – is a critical aspect of a product’s success.

Traditional workflows between designers and developers create an “us versus them” atmosphere. Designers become frustrated at the developers’ speed of implementing design prototypes, and programmers push back on the designers’ changes to avoid painfully reworking software. That’s why we created Storyboard to work directly with Adobe Photoshop and Sketch files – the designer’s tools of choice – obviating the tedium of continually translating from UI wireframes to software and back. We also included software APIs to manipulate Photoshop model elements that let designers and programmers actively collaborate on the resulting user experience.

That’s a little bit of Crank history and why we exist. We’re proud that we’ve created an alternative to the age-old designer versus developer paradigm. We know Storyboard helps build more attractive, more desirable products, but by bringing designers and developers together, we also feel it helps build more cohesive teams.

If designers don’t have an equal seat at your table, make sure they do. Elevating your designers is something we believe in. But it’s just one of the many factors we think are important to building a successful product. To see the rest, check out our eBook: Building your next killer embedded UI.

How to build your next smartwatch UIs - without killing your battery.